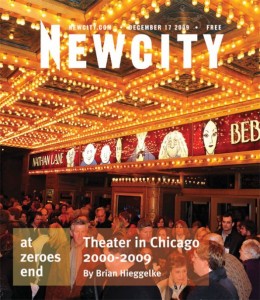 Lit: I did a short review/preview of Jay Ryan’s new book of poster art here, and a long Q&A with John Freeman about his book, “The Tyranny of E-Mail.” John’s most famous around these parts nowadays as the editor of Granta and the creator of their Chicago issue, but before that, John covered the books beat (from New York) for Newcity for several years. John’s book provokes thought about a tool that has profoundly changed my life, for better or for worse. One permanent habit change, suggested in John’s book: I changed my email to check for new mail every hour, instead of every five minutes. The result has been strange: I now have these long strings of minutes, even tens of minutes, where I can concentrate on one thing at a time. Concentrated effort is so old-school.

Best of Chicago: You can read my editor’s letter here, but you’ll have to visit the site and speculate which items I wrote. I wrote more than thirty of them, so the odds are good that you’ll find some. Bonus points to those who can name them.

Stage: I reviewed “The Mystery of Irma Vep “at Court, “The Santaland Diaries” at Theater Wit, American Blues’ “It’s A Wonderful Life: Live at the Biograph!” and “In the Heights” at Broadway In Chicago. I published my Top 5 Plays for 2009 here. But the big kahuna, the story that erased about two weeks of my existence in early December, was my two-part retrospective on the decade we’ve just finished in theater and dance. The theater story has a number of sidebars, which can be accessed from the bottom of the story, including budgets of a range of Chicago theaters, the biggest hits of the decade for a range of theaters and answers to a couple of questions from more than three dozen leaders of Chicago theater.