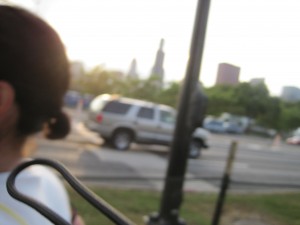 Shh. I caught a secret snap of Jan running in last summer's Elvis is Alive 5K

Ten days till the Chicago Marathon, my second. (You can read my longish chronicle of my midlife journey from a sedentary state to distance runner, which I published last year, here. It was a finalist for the locally prestigious Lisagor Award, losing out to a Playboy article that broke new ground in the Barry Bonds steroids story. Imagine that: a jury thought the writer who broke the scandal about one of the greatest athletes of a generation had a better story than my navel gazing. Oh well. I just wanted to be able to put “award-winning sportswriter” on my resume!) This year, the focus on my running has been not on finishing the race, nor on improving my time. This year, it’s been about running with my wife, Jan, who will be running her first marathon this year. We plan to run together. Nike was kind enough to give us entry into the race via their sponsorship, so we avoided that moment of truth (and commitment) when you break out the checkbook to register back at the beginning of the year. (The race sells out earlier every year; this year registration closed on March 23.)

While I yap about my running to the point of fatiguing everyone who knows me, Jan’s the opposite. She doesn’t want anyone to know she’s doing the marathon. Up until she did her first twenty-miler, she was still saying she might not go through with it, even though she’d been training for months. So don’t tell her I wrote this. I don’t want to get in trouble.

Running with a partner is a whole ‘nother experience. Not only does one partner have to sublimate competitive instincts in order to run at the slower partner’s pace but, and here’s what caught me by surprise, you have to work a whole social dynamic into the mix. And I don’t mean the social dynamic like, ‘hey, you want to go for a run?’ that a friend might put out there every once in a while. I mean hours and hours together, week after week, in some of the most challenging conditions: extreme heat, lightning storms, pesky hangovers. You’ve got to have a strong relationship to pull it off. I guess it helps that we’ve been together thirty years, though we still know how to bicker. Nothing like a spousal battle first thing in the morning in at the end of an eight-mile run. That’ll kill a runner’s high. On the other hand, we’ve had great conversations on the long runs. It can be a relationship builder of a most unique order.

A couple of other things I’ve done differently. Last year, I self-trained without a program, just dialing up the mileage as fast as I could. Jan needed more structure, and found the Hal Higdon marathon training program online. (She’s more the norm, I suspect. Most runners I know train in groups of some sort, either formally, like the Chicago Endurance Sports folks, or in ad hoc collectives of friends.) So this summer, I’ve been training on a schedule. Which means, we’re tapering now, after peaking with a long run of 26 miles two weeks ago (I know, the program said to do 20, but read my story for why I do 26), and I even intentionally don’t run some days. I did not run today; Thursday is the day off.

The other thing I’ve noticed is that not everyone has the same running personality. I’m pretty upbeat when I’m running, even when in extreme pain. Others are not. I’ll leave it that.