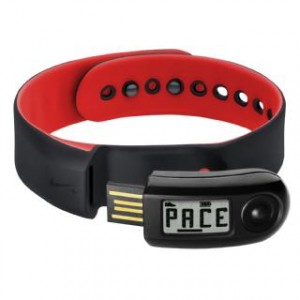 Last “long” run before the marathon this morning: eight miles. Two weeks ago, that distance was a routine weekday run, so it was not really a physical challenge. Except: the weather. Cooler, yes, low 50s, but light rain and gusting 25 mile per hour winds. This would not be pleasant marathon weather, since running into the wind today was like a standstill. But the marathon weather forecast is promising: high 60s, 30 percent chance of rain.

If you know me, or read my story last year, you know that the Nike+ system gets the credit for me running at all. So when it stopped working correctly this summer, it kind of broke my heart. Jan’s running with my old Nano (her last one died after a rainy run); it’s the one I ran the marathon with last year and it works fine. I switched to the Touch, which, like the iPhone, now comes with Nike+ native in the device. Though a bit bulky, it too worked fine after my switch.

Fine, that is, until Apple changed the OS shortly before the introduction of the iPhone 4. Since then, the Nike+ system has worked so poorly that I cannot recommend it anymore, unless you’re using SportBand or the Nano. (Based on discussion boards, my problem is not unique.) Whether I use the iPhone or the Touch, the system now arbitrarily drops runs while you are running, putting the system into pause mode. The only way you can usually resume is to end your run and start a new one. This is not only a pain to do while you’re running, but you often lose a mile or so before you realize the problem. And you don’t get “credit” for finishing your run. This is especially frustrating on a long run: two weeks ago, we did 26.2 miles. It was a miserable day, running most of the time in the rain, at one point in a lightning storm. I made it through all that and finished, but the Nike+ system decided to quit at mile 21. So for posterity, I got credit for a 21 mile run and and a 5 miler. Frustrating. 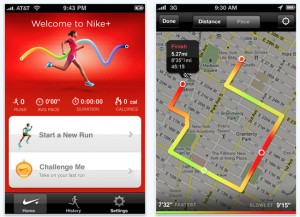 So last night I bought the new Nike+GPS running app ($1.99), which uses the GPS in the iPhone (or, apparently the accelerometer in the Touch), rather than a chip in the shoe, to track your run. I tested it today for the first time. I also charged up the SportBand Nike’d sent me a few months back in order to see how this newer version worked. (I’d run with the earlier rendition of the product a couple of years ago, and liked the ease of tracking pace and progress, but found it less accurate than the iPod-based system. And once, it failed to sync a half marathon that I never got credited for running. Not to mention, no music or books.)

And just to be safe, I carried my Touch running the old system.

I liked the SportBand for the same reasons I liked it before: it’s minimal in weight and imposition, and nifty simple for tracking pace and distance in real time. And, based on one run, I loved Nike+GPS. The jury’s still out till I knock off more than an eight miler, but it’s promising. And it creates a map of your run that tracks not only distance, but also pace so you can study how wind, terrain and direction affected you. I have hopes that the GPS basis will make it more accurate in tracking distance, and more dependable, since it does not rely on maintaining a wireless chip connection. I’ll keep you posted.

So as of this writing, I think I’ll wear the Sportband AND use the GPS system on the iPhone next Sunday.