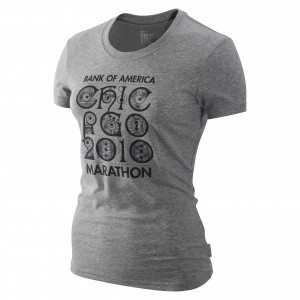 The first year Nike sponsored the Chicago Marathon, 2008, they sent me over a bunch of the shirts and I loved them. They still remain among my favorite running shirts—design, fit and comfort—in fact, I wore the long-sleeve version in last year’s marathon. (Ironically, the only marathon shirt I have to commemorate the marathon I actually ran is the official shirt. But there’s some poetry in that, I think.) 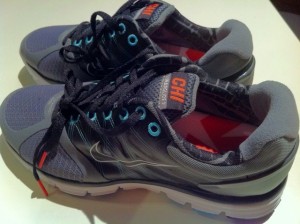 Anyway, today, I was given a pair of the limited-edition Chicago Marathon LunarGlide+ 2s, pictured here, and I have a conundrum. I’d already decided on my shoes for the race, but I’m really tempted to sport these babies. I think I’ll try them out the next couple of days (the training program says no runs at all, but I’ll bounce off walls with this beautiful weather, so I’ll kick in a 5K or so) and then decide.

Shoes are the foundation of the running sportswear industry, but I’m discovering I’m not especially fickle. (I save my fickle for shorts, which I’ll write about tomorrow or Friday.) As long as I’m wearing my size, that is. When I first started running, Nike gave me shoes as part of a PR pitch, asking my size. Nine, I said, citing a shoe size I’d always worn. When I wore those out, I got a proper fitting at Fleet Feet (you must buy running shoes at a running store), and they put me into tens. A full size larger. Today, my toes are still trainwrecks of callouses, black nails and other glories, but they don’t get sore.

Fleet Feet put me into Nike Vomeros, which I loved. I went through about five pairs of those over two years, until Nike sent me Lunar Glides last September, a few weeks before the marathon. My Vomeros were done, and I was ready for a new shoe, so the timing was perfect. The LunarGlides represent breakthrough technology that uses “Flywire” to create a lighter shoe, as well as a sort-of self-adjusting cushion fit that can accommodate pronation as well as other kinds of running foot-strike nuances, so that you don’t need a more padded shoe like the Vomero. 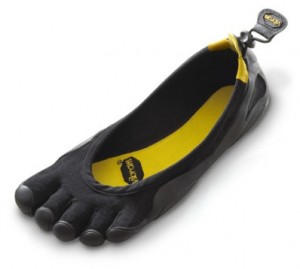 Speaking of padding, Christopher McDougall’s book, “Born to Run,” had a major influence on my thinking about shoes, as it did many runners. (It’s my favorite running book, hands down, ever. I doubt Nike likes it much, since it lays the blame for most running injuries on their footstep.) The gist of the argument was that adding all the padding to shoes, in order to make endurance running more comfortable, more accessible to the masses, led to an unnatural foot-strike and injuries. Without recapping the whole book, he went on to postulate that the single variable that sets homo sapiens apart from all other species was our ability to run long distances. And that, naturally, the natural state was the way we’d so evolved. His book covered the barefoot-running movement, where the weight of the foot-strike hits the balls of the feet, not the heels at all, and brought what had been almost a cult-like running movement into the mainstream. Vibram has been the big beneficiary, with their “Five Fingers” shoe-glove, though I saw straight-up barefoot runners on the lakefront path this summer as well, for the first time ever. Nike’s answer to this, launched when this scientific argument was first articulated long before the book came out, was the Nike Free, a minimal support shoe. I have not run in this shoe, but hope to. I’d even try the Five Fingers, for research purposes, but I really hate the look of those things. Kind of “Planet of the Apes,” without the cool retro feel. (I always hated those rainbow toe socks teen-age girls seem to wear at some point, as well. They kind of look like those.) 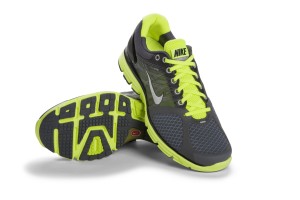 The upshot for me was that, when the more streamlined LunarGlides were introduced, I was ready for them, psychologically. I wore that first pair in the marathon last year, and had a great experience. Soon after, Nike sent me to a “Running Summit” in San Francisco, where the Lunar line was discussed in more detail and I accumulated a couple more pairs, which had since been slightly retooled to tighten the grip around the wide part of the foot. (I had noticed the “airiness” in that area, but it hadn’t affected my running in any way.)

So, now, my third pair  of Lunar Glides is close to the end of their useful life. 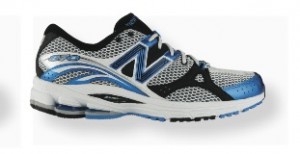 As luck would have it, New Balance sent me a pair of their new lightweight 870s to review, so two weeks ago, I switched into them, in order to save my LGs for the marathon, my first non-Nike running shoe. The verdict? I like. Very lightweight, comfortable—almost like slippers—and a nice trendy blue colorway. I could see wearing these in the marathon and would recommend them without hesitation.

But I’m sticking with my LunarGlides. My first-generation LGs still have a hundred miles or so in them, but these limited-edition Chicago shoes? They look pretty fine. I’ll see how they feel these week and decide.

Stay tuned, ‘cuz I’m sure it’ll be hard to even go to work and all this week, with that nagging question haunting you, “What shoes will Brian wear?”