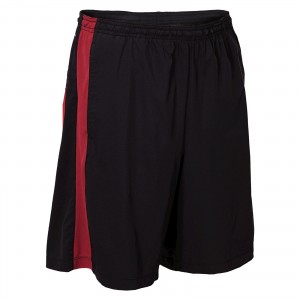 So I decided to stick with the training program and not run today. All of this barely running, and my legs are feeling creakier than ever. Jan said she’s feeling the same and brilliantly observed that we’ve been off our daily dose of the i vitamins (ibuprofen, that is). I hope that’s all it is. I didn’t feel much in the swing of it today, since I didn’t run, so I surfed Twitter a bit to see how folks were buzzing about the race. The buzz is, simply, hot. My earlier elation about the weather is, well, a bit more tapered, now that the high is forecast at 85, not far off the ill-fated high of 2007. Not a problem for me, but Jan and hot running are not so friendly.

I found, on the Twitter, this couple from Australia who are running their fiftieth marathon together here on Sunday; they’ve turned it into a gig of sorts (coupleontherun.com). That’s some quality time together. I’ll be lucky if Jan wants to ever run one again after Sunday.

I think I’m gonna have to bail on the black shirt; maybe even go sleeveless. I’ll figure that out tomorrow. But I know I’m wearing my gray Saucony shorts. Suitable running shorts are by far the most challenging running gear to find. I don’t do the short shorts (think Bill Clinton on a jog), but I prefer the medium short length. I’ve tried the slightly longer, baggier style, and while I like the look, I get chafing problems on long runs over ten miles. New Balance just sent me these super long, super baggy shorts that look like they belong on the basketball court (I’m guessing they’re popular with suburban dudes who sport goatees). I’ve worn them a few times on shorter runs and they’re pretty comfortable so far but I dunno, I’ll likely switch them over to hoops. Nike also gave me some shorts last fall, with a Spandex-style lining. They seemed cool but the lining is too tight and  I can’t really wear them much.Give me a shirt in my size and I’ll wear it. Give me shorts in my size, and it’s hopeless.

Equally important for the shorts is the pocket situation. Apparently some runners don’t want any pockets. They must be Olympians who have coaches to hold their house keys, or trail runners in Idaho who don’t lock up their mud huts. In the city, you need your keys and, at least me and a million other runners, you need some place to carry your iPod. You might even want gels, ShotBlox or whatever. This means you need some real pockets. Nike’s been putting its Nike+ systems on the iPhone and the iPod Touch, both bulky devices, but good luck finding shorts with pockets that will hold the phone. Something doesn’t compute.

So these Saucony shorts I’m wearing Sunday are mostly OK. Except no drawstring, so I think the elastic must be just a tad tighter to make up for it. At least, based on the chafing at the waist, I’m surmising it’s tighter. The extra five pounds I’ve put there have nothing to do with it, I guarantee. Anyway, they are the length I like, and do have a back pocket that will hold an iPhone but, without the drawstring, the weight of the phone threatens to pull them down to obscene levels.

Originally, I was partial to Adidas shorts: good length, good pockets, cool stripes. I ran the Chicago Marathon last year in the very first pair of Adidas shorts I bought back when I started running. But after thousands of miles, they finally gave out this year and I don’t use them for runs over five miles anymore. I bought a new set of Adidas shorts this summer, with equally cool stripes, but the pocket has been moved to a diagonal side slit with a zipper. it’s much harder to get the phone in and out when you want to check progress, and the shorts are a bit tighter, less comfortable. I guess you can’t go home again.

So here’s what I want: medium-length shorts with one pocket large enough for the iPhone. Is that really so unreasonable?