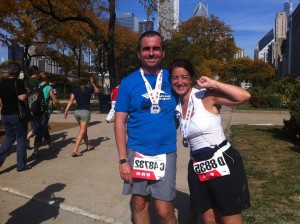 We finished the race, 26.2 miles, albeit a tad slower than we hoped. But given the heat, and Jan’s consistent problems with running in high temperatures, I was more than happy. Around mile 20, a bank clock read 87 degrees. Race officials, who’d started the race “code green” for optimal running conditions, had switched to code yellow and then, for the last six or so miles, code red. But I will never say anything other than “glorious” about eighty degrees and sunny in Chicago in October: I’ll take this over last-year’s fifty-degree-cooler day any time.

This is something you have to experience to believe: running the Chicago Marathon with a partner can truly be fun, and it was. The neighborhoods explode with character, whether it’s the Wonder Women cheerleaders in drag in Boys Town, the booming salsa music in Pilsen, or the Chinese dragon kicking it in Chinatown, the entertainment along the way makes the tougher elements, like the pain and fatigue, bearable.

But more than anything, it’s the fans. Sure, your own entourage is special, but most of the race you’re relying on strangers to cheer you up and onward, and it’s amazing how powerful that can be. Folks of every age, race and Halloween-costume persuasion do more to push you forward than they’ll ever know.

So here’s to you, spectators and, for next year, a few notes:

* Make me laugh: Stupid, silly, clever signs, t-shirts or costumes are to the marathon what white tie is to  a royal dinner—recommended accoutrement. When your legs are throbbing, your body is chafing and your will is waning, laughter is the best medicine, indeed. (And cheesy is OK: our critical standards are much lower under duress.)

* Excessive cheering and goofy antics are delightful: Again, make me or just cheer loudly. When the runners approach a larger crowd, and the crowd erupts in cheers, it’s like a medical procedure that injects enough adrenaline to carry us forward to the next cheering crowd.

* Bring your children (and Purell): The little ones, with their unquenchable appetites for high fives, are precious beyond words.

* Cheer us by name. I didn’t wear my name on my shirt like many did, but apparently Brian is a popular marathoner name. My kids said they flashed their “Go Dad” and “Go Mom” signs even when we’re not around, figuring they’d still hit a mark.

My Nike+ systems both let me down. The SportBand dropped the run around mile 23, so I had to restart it, and the Nike+ iPhone GPS mysteriously shortened my run by two miles, truncating the northernmost two miles, which I discovered only when I finished (I ran without headphones). Ironically, I used the new “Cheer Me On” feature so it would post updates to Facebook in real time, meaning it automatically told all my friends I’d finished my run at 24.2 miles. I didn’t have energy to do much yesterday after the race, but I did take the time to post a correction.

I ended up running in my well-worn LunarGlides rather than the new ones, and they served me well. My legs feel almost ready to run again today. I bought a nifty waterproof Spibelt at the Expo (sort of a streamlined fanny pack just big enough to squeeze the iPhone in) and was very happy with it. Not only did it keep the weight of the phone from pulling down my shorts, but it did not chafe and kept my phone dry. Given all the water-hose sprayings, from both officials and fans along the way, I was very relieved.

I ran in last year’s marathon t-shirt, not only for the symbolism, but also because it is very light weight and the medium blue color more reflective than the black I’d planned. Of course, I ran shirtless for about the last five miles, as the chafing was starting to threaten those ugly blood streaks from my chest. I know I looked a bit fuller in the gut than I’d like, but since I dropped 9.7 pounds since the previous day’s weigh-in, figured it was as good as I could get, for now.

I’m strategically not asking Jan about next year till the legs are a bit stronger again, but a good sign: when she uploaded her results to Nike+, she labeled it “first marathon.” First means more than one, right?